A diary to record Angus’ Flow Test Operations and keep our members and supporters updated with the latest information and news happening onsite.

FFBRA objects fundamentally to the presence of the oil and gas industry in our village on grounds of air pollution, industrialisation, water use, potential water pollution, earthquakes and health impacts, toxic waste, climate change, noise, traffic, and the imposition on our once peaceful lives of stress and strife.

Please help our campaign to keep the Oil and Gas Industry out of Balcombe. Any donation however small will help to fight the next planning application.

Angus have applied for permission to carry out an “Extended Well Test” for 3 years. They wish to:
– Pump out previously used drilling fluids
– Carry out an extended well test over 3 years using acid and nitrogen when necessary to release and lift the oil trapped in the shale rock.

Instructions for objecting to the latest application:

Online: On the West Sussex County Council Website – WSCC/071/19
Give your name, address and email, then your comment. Don’t forget to select ‘Objection’ in the final drop-down box before you submit your objection. Otherwise your objection will not count.
By email: planning.applications@westsussex.gov.uk, including your postal address
In writing: County Planning, West Sussex County Council, Chichester, PO19 1RH

Angus are now planning to return and conduct an Extended Well Test at the Balcombe site.

A cement bond history and Analysis of Balcombe 2 well has been published by FFBRA following Angus’ updated that there was unexpected water in the horizontal section of the well – Flow Test Results – “Unexpected Water” – where has it come from?

Balcombe residents are monitoring the traffic going into and out of the site on a daily basis. Movements are being checked against whether Angus are sticking to their planning conditions and subsequent promises to avoid school pickup and drop off times or not. This is vital information for fighting future planning applications.

Having a continual presence from the village down there has made them change their behaviour already. It shows them how closely they will be scrutinised by us.

We really need help with this. If you can give just an hour of your time this week, please get in touch through the closed NOFIBS Facebook page.

If you are unable to give your time to Traffic Watch but would like to help please donate to FFBRA. We need to raise funds to fight the next planning application.

Angus have announced results from the 7 day flow test

It is now a week since Angus started the flow test operation at Balcombe. The 7 days of testing should complete today and the equipment will start to be removed from the site over the next week.

What happens to the Balcombe Field Discovery, after the Company completes the 7-Day flow test? All of the equipment is removed with the exception of monitoring equipment. The site’s appearance does not change. The company monitors the pressure of the “shut-in” well for two months to measure the rate of pressure recovery and any residual pressure depletion seen in the well. At the end of this period, the monitoring equipment is then removed.

FFBRA has received a number of emails from our members regarding excessive noise from the Angus Flow Test keeping residents awake at night.

We would encourage anyone who is being affected to report the issue to the relevant authorities who will be able to take action.

Despite Angus’ assurance there would be no noticeable noise, and the traffic would be minimal we are finding that again like in 2013 we are having to monitor and report issues ourselves. The escalation path is confused with so many authorities involved and with partial responsibility for noise, and the emphasis is on Angus the operator regulating themselves.

Update –  An “abundance of caution” has coincidentally caused Angus to install echo barriers at the site.

FFBRA sent a number of questions to the Angus community email address on Friday 21st September. So far no response has been received.

Minutes from the first CLG meeting have been received by Balcombe Parish Council.

A camera has been setup at the site. The following email has been sent to Angus to ask why.

A camera has been setup at the Balcombe site. Can you please explain what this is monitoring? We were told in the CLG meeting that cameras/webcams could not be setup due to potentially sensitive information. 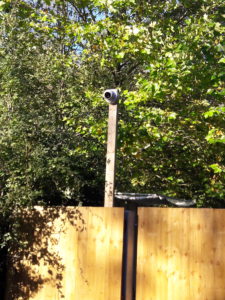 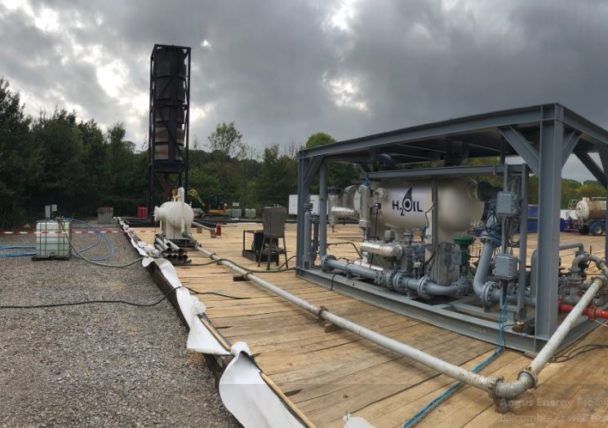 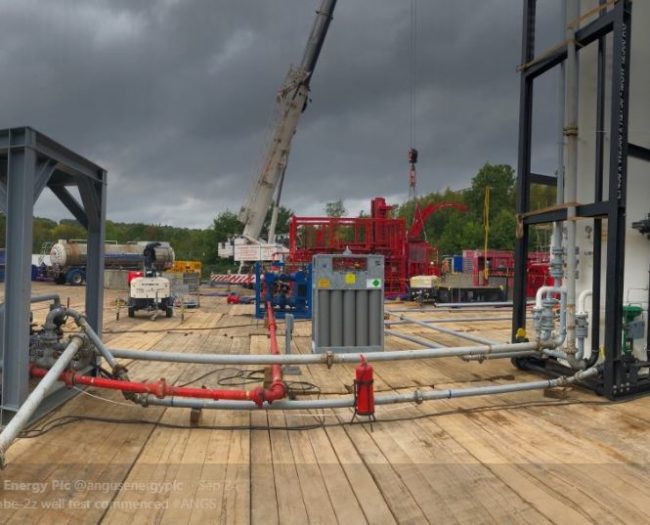 When can the flow test start?

There are 5 conditions of the Environment Agency (EA) permit which will need to be met; The EA visited the site at Balcombe on 20th September and indicated in the Community Liaison Group (CLG) meeting on that date that sign off was imminent.

The 21 conditions in the planning decision document have been discharged by West Sussex County Council (WSCC),

The Oil and Gas Authority (OGA) will need to give consent after that. FFBRA has contacted the OGA and Angus to explain this process more fully.

The first Community Liaison Group Committee meeting was held at Bramble Hall, Balcombe. Before the meeting representatives were invited to a site visit at Lower Stumble

The next meeting date was set for Thursday 18th October where results would be shared with the group.

“Angus Watch” is setup by local Balcombe residents to monitor the amount of traffic passing the local primary school.
Traffic has been missing the site entrance, and going through Balcombe a number of times before finally entering the site. Large articulated lorries have also been spotted in the centre of the village trying to find the site.

A group of 50 local Balcombe mothers and concerned residents walked to the site to show their displeasure at Angus’s presence. They carried placards and banners denouncing oil exploration in the High Weald Area of Outstanding Natural Beauty, and read limericks criticising Angus Energy. 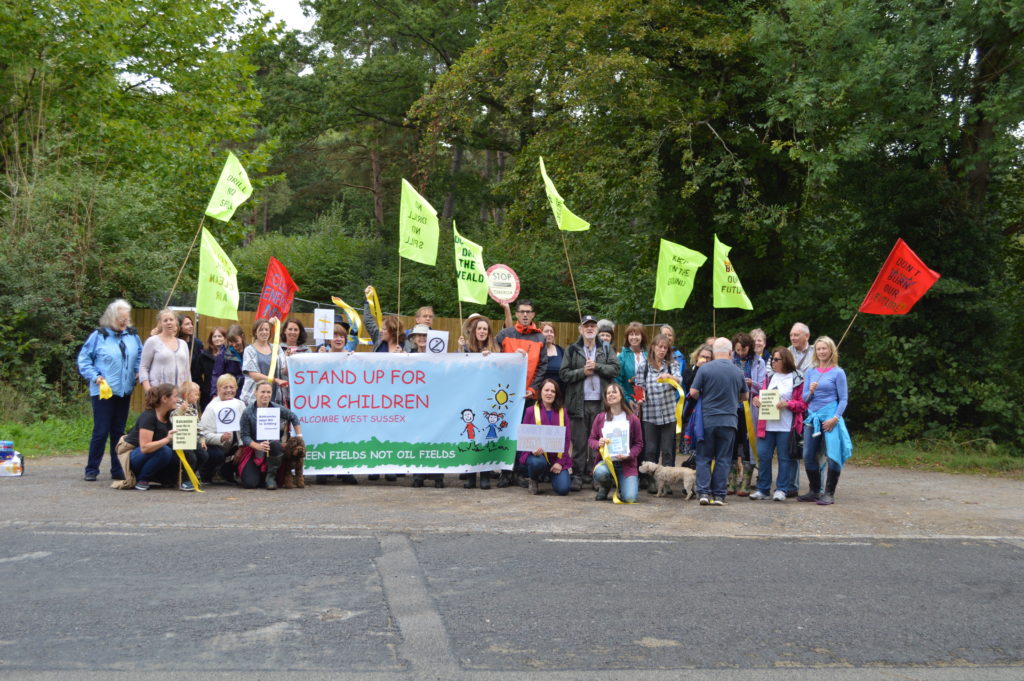 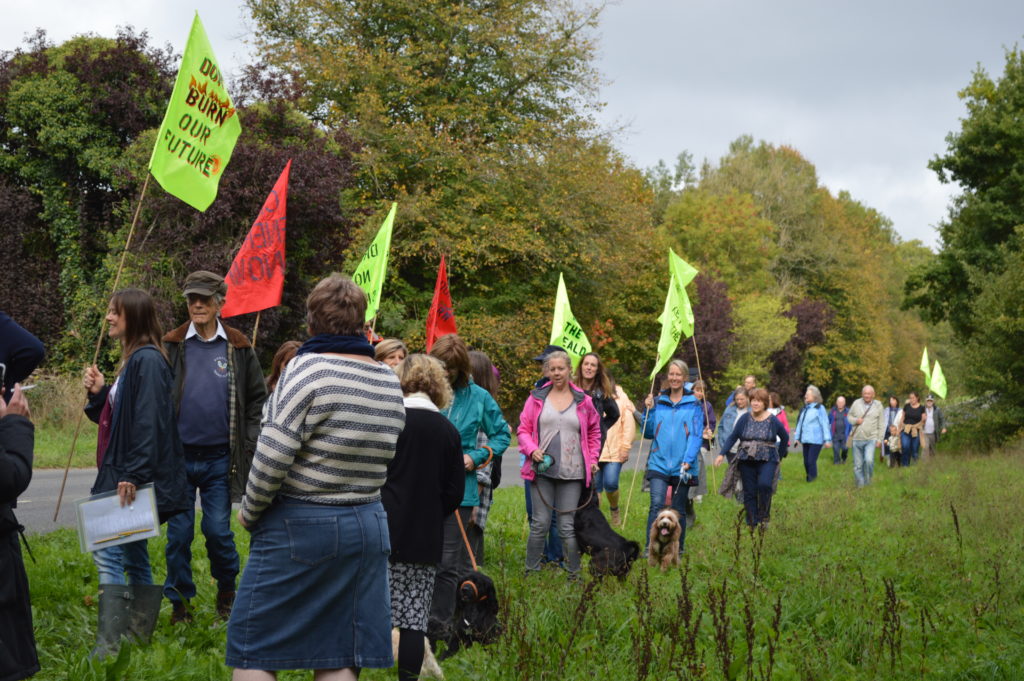 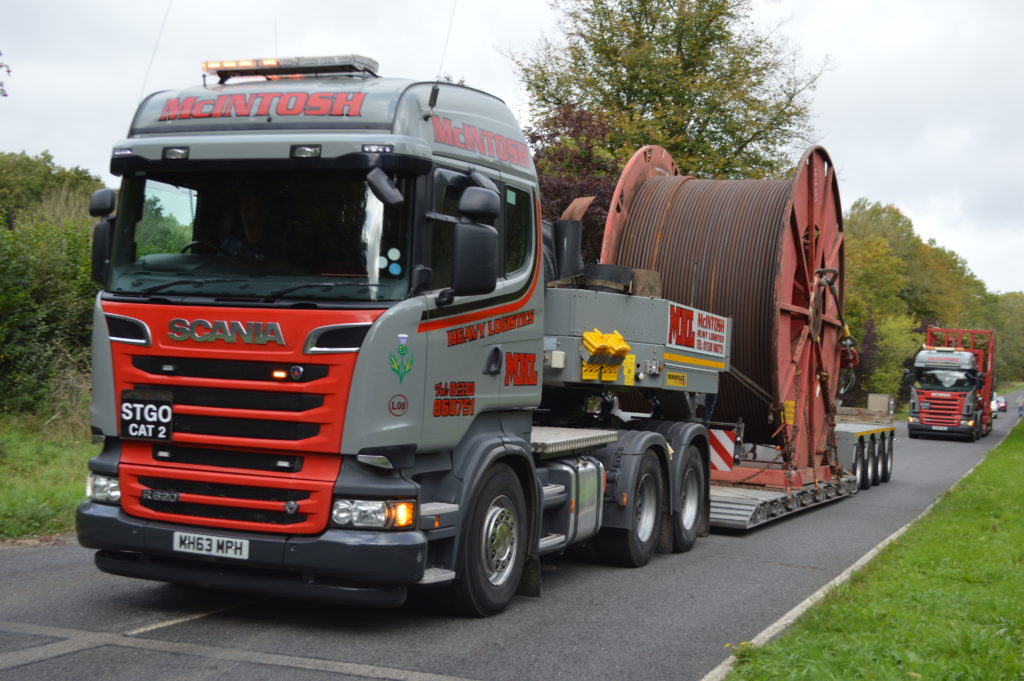 Angus was granted an injunction by the High Court on Thursday 13 September and it will be formally served shortly. 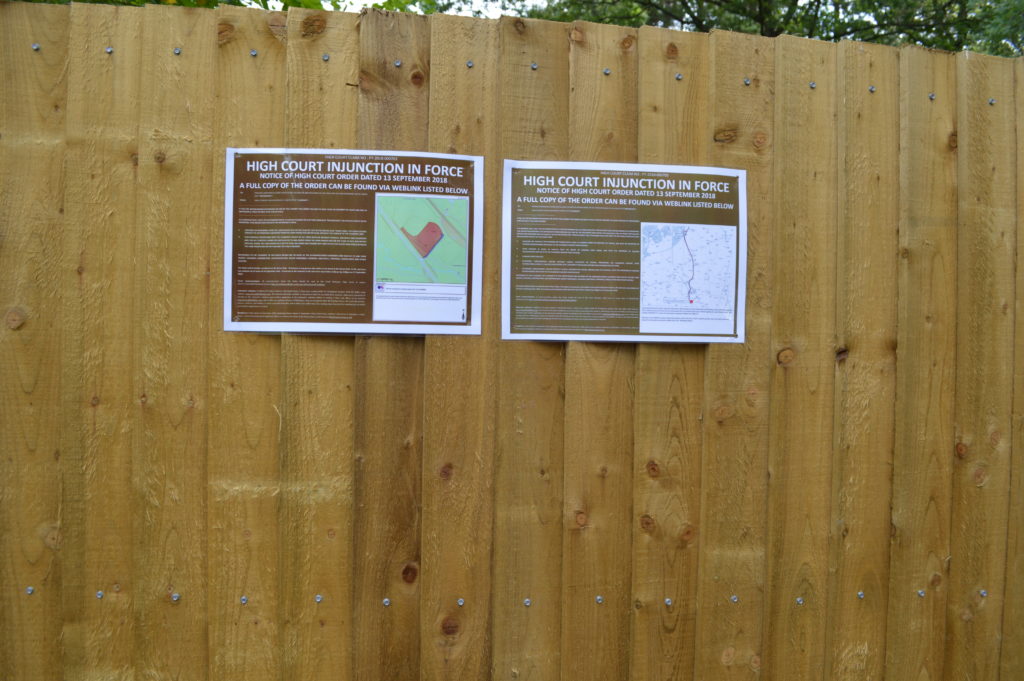 Deliveries are spotted entering the Lower Stumble site through the Balcombe Sawmill entrance which is against the Traffic Management Plan agreed as part of the Planning Conditions. The following response was received from West Sussex County Council

“Following our investigations, the vehicle movements in question do not appear to be part of the planning permission site set-up activities. As I understand, these movements are part of permitted development activities resulting from requirements of the Environment Agency.
In conclusion, no breaches of planning conditions have occurred.”